If you’ve adopted a guinea pig into your family, you may observe that their eyes are always open. For this reason, you’re probably wondering if your little pet ever sleeps?

The truth is that guinea pigs do sleep, but they do so with open eyes. They occasionally sleep with their eyes closed, but this behavior is rare.

These mini-organs work very differently from our own eyes, and there is nothing wrong if your guinea pig seems to be awake and alert most of the time.

Continue reading to discover why guinea pigs keep their eyes open when they sleep, plus the other tricks they adopted for survival in the wild.

Why Do Guinea Pigs Keep Their Eyes Open When They Sleep?

There are several reasons why guinea pigs sleep with their eyes open. Among the most prominent is that guinea pigs adapt as prey when in their natural environments.

Out in the wild, there are many threats that these furry creatures face, so keeping their eyes open prepares them to run away and hide at any given moment.

Another reason why guinea pigs keep their eyes open and alert is that they possess an inquisitive nature and are intrigued by the people, animals, and environment around them.

Guinea pigs have some impressive sensory qualities: they see in color, view 33 images per second (compared to 22 for a human), and have 340-degree vision. On the other hand, though, they have poor depth perception, which means that they can’t see very far into the distance.

Is It Normal For Guinea Pigs To Sleep With Their Eyes Open?

It can be pretty off-putting to witness your guinea pig sleeping with its eyes open, but it’s normal behavior that these small animals adopted for their survival.

There may be rare occasions when they feel safe enough that they’ll sleep with their eyes closed. But, in general, it is unusual for a guinea pig to close its eyes.

Will A Guinea Pig Always Sleep With Its Eyes Open?

If you have a newly adopted guinea pig, they are more likely to be alert and keep their eyes open than a guinea pig whose been living with you for a while.

This is because when you adopt a new guinea pig into your home, they may not be so used to human contact or petting, and therefore, they won’t feel safe enough to close their eyes.

Even though we have domesticated guinea pigs for more than 3000 years, their natural instincts remain strong. Your guinea pig will generally close their eyes more as they become comfortable in their environment. But, if your furry friend still sleeps with its eyes open, don’t be disheartened.

It may be difficult for us to understand just how heightened the sense and awareness of a guinea pig is because we are predators, but the instinct to protect themselves is overwhelming for these little creatures.

The sleeping habits of a guinea pig are one of the factors that distinguish them from a range of other small pets.

How Can I Tell That My Guinea Pig Is Sleeping?

The most common sign that your guinea pig is sleeping is that they remain completely still in an almost trance-like state. This usually happens in a dark and safe space, where they feel that they can let their guard down.

Occasionally, you may notice the whiskers and ears twitching when your guinea pig experiences REM sleep.

Will My Guinea Pig Lie Down To Sleep?

Possessing a strong instinct for alertness, you can be sure that your guinea pig will not put its life at risk for a quick lie down. These little creatures remain upright at all times.

Your guinea pig will avoid lying down to sleep – that makes them far too vulnerable to predators. Instead, they will remain standing and alert.

How Long Do Guinea Pigs Sleep For?

Guinea pigs sleep for only 20 seconds to six minutes at a time.

There is a stark contrast between the sleeping habits of predators and prey. While the former can close their eyes for a night of sound sleep, prey animals such as guinea pigs don’t have that luxury because every second of escape time counts.

Guinea pigs have no real self-defense tools, so their best chance of escape is simply to run away. Open eyes also help to trick their predators into thinking that they are always awake. A predator is far more likely to attack a sleeping animal than one it perceives to be awake.

In addition, a guinea pig’s brain can still sense the surrounding environment, even as they sleep, so keeping their eyes open allows them to watch for any lurking predators.

How Do Guinea Pigs’ Sleeping Habits Help Them Survive In The Wild?

Guinea pigs have several sleeping habits different from that of a human, which all help to protect them from the dangers of predators.

They only sleep for small amounts of time. While the average guinea pig will accumulate a minimum of 4-6 hours of sleep each day, it does so in small increments that are only minutes long. This means there is less time for a predator to approach a sleeping guinea pig.

Another way a guinea pig keeps itself safe is to avoid deep sleep. If you approach your guinea while they are sleeping, you may notice that it doesn’t take much to wake them up. This is because they sleep lightly most of the time so any disturbances will wake them immediately.

In essence, the faster the reaction time of a guinea pig, the better chance they have of surviving out in the wild. And anything they can do to increase their reaction time helps them stay alive.

Plus, guinea pigs have polyphasic sleep, meaning they have multiple sleeping times during the day. (Humans and many other mammals are monophasic as we have one sleep period through each 24-hour cycle).

This sleep pattern allows a guinea pig to conserve energy while spending the least amount of time in a position of vulnerability,

Why Is My Guinea Pig Sleeping For Longer Than Usual?

If you notice that your guinea pig is sleeping for longer than usual, it’s good to visit a vet for some advice.

A common cause of oversleeping in guinea pigs is lethargy which is most often linked to vitamin C deficiency. To rectify this, try giving your furry friend a selection of vitamin C-filled fruits such as oranges, apples, and pears that will help to increase the activity level of your pet once more.

Just because they keep their eyes open doesn’t mean that guinea pigs get any less sufficient sleep than humans. In fact, they may sleep for even longer than we do, with some accumulating up to nine-and-a-half hours of sleep each day.

Guinea pigs aren’t nocturnal, and they’ll usually be pretty quiet through the night, as this is when they like to enjoy a lot of their sleep. As they get older, guinea pigs will usually sleep more during the day to conserve their energy and stay healthy.

These small mammals are crepuscular, which means they conduct most of their activities during dawn and dusk.

Can Guinea Pigs Close Their Eyes?

Yes, guinea pigs have eyelids that allow them to close their eyes – they just don’t use them very often.

Do Guinea Pigs Ever Close Their Eyes?

The amount of time a guinea pig spends with its eyes closed is minimal, thanks to the dangers it faces in the wild. In natural environments, guinea pigs are at the bottom level of the food chain, so they cannot afford to become inattentive.

However, there are some reasons why a guinea pig will close its eyes, such as moistening them or removing dust. These are more likely to be blinks rather than sustained periods of shut-eye.

As you bond with your guinea pig and they learn to trust you, your presence could be enough to keep this little pet calm. If you regularly have them on your lap for stroking and cuddle sessions, you may notice that they close their eyes. This indicates that they are fully relaxed in your company.

This is pretty rare behavior, and if your guinea pig learns to trust you to this level, it is something that you should savor.

The guinea pig’s evolution has seen these furry little creatures develop with the propensity to keep their eyes open even when sleeping. This would have been an essential skill for a guinea pig with prey such as hawks or wolves lurking around every corner.

Once you adopt your pet and they settle into your home, you may find they can relax more easily and may even close their eyes from time to time. If this happens, treasure the moment because it means that you have earned the trust of one of these furry little creatures. 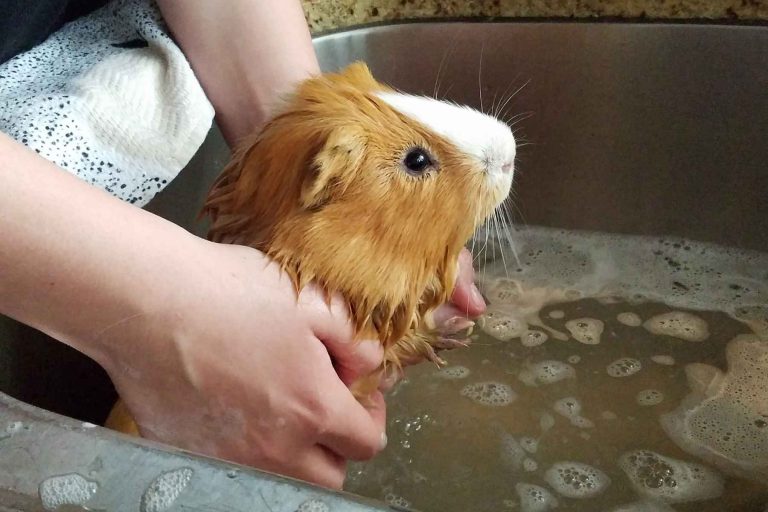 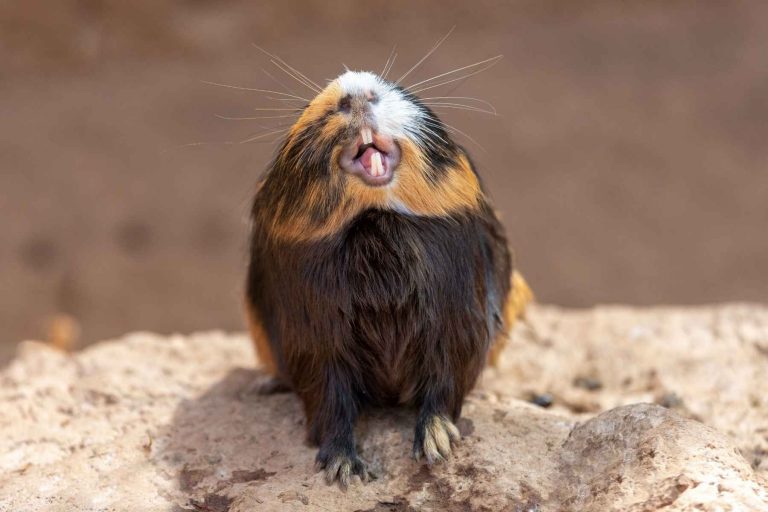 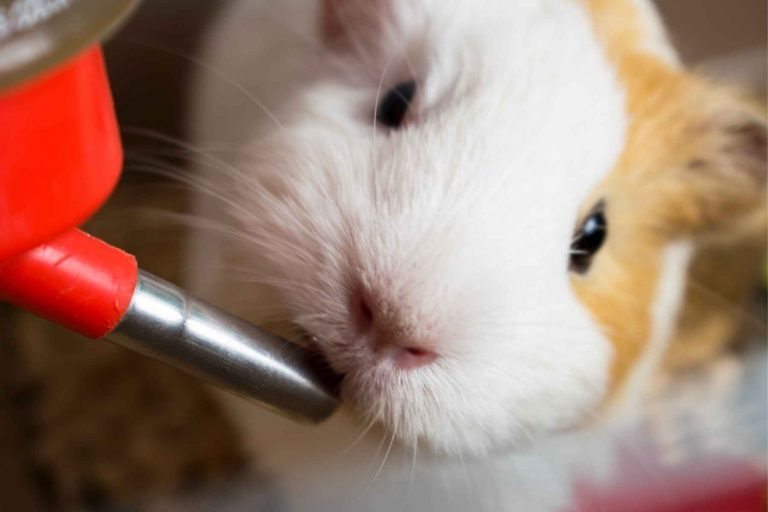 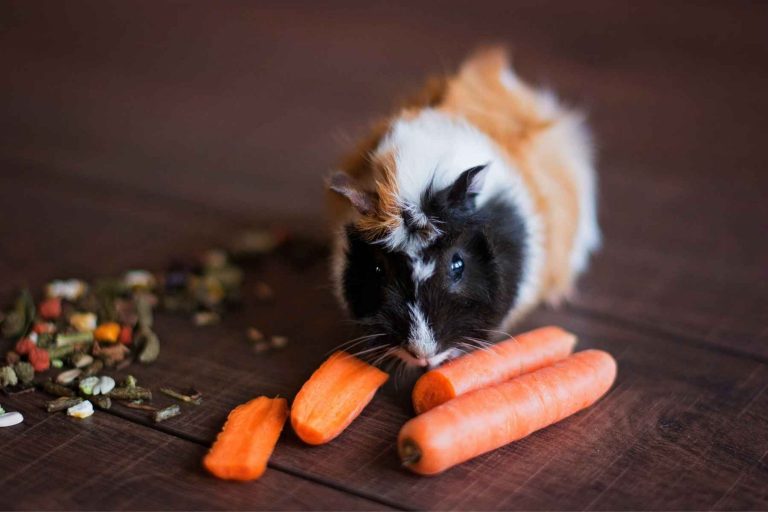 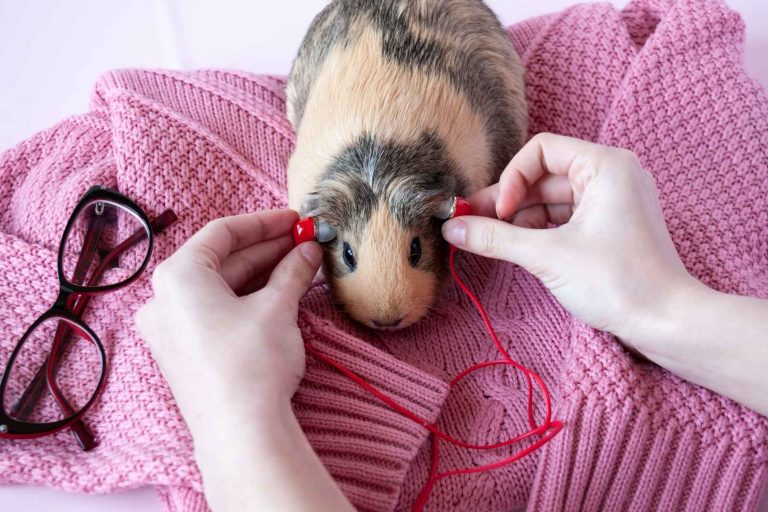